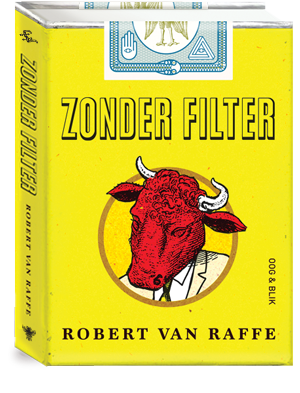 In februari my first graphic novel was published in the Netherlands bij Oog & Blik / De bezige Bij. Please read below the English information about this novel from the Dutch Foundation For Literature:

« James Joyce’s Ulysses as the basis for a comic book: it takes a dandy like Robert van Raffe to come up with something quite this bold. Modesty is for the medio­cre! In Unfiltered, a vagabond comics artist drifts through the streets of a university town in search of insight and distraction. He knocks back the booze, he chews the fat, he suffers. Along the way he weaves a wondrous visual narrative.

The young artist stands beneath the dome of Rome’s great Classical temple, the Pantheon, as God stares down at him through the oculus. This is the opening gambit of Unfiltered, Robert van Raffe’s debut graphic novel, in which he himself features as a character. From the cosmic grandeur of this first scene he constructs a layered narrative, which on the surface appears to tell a tale of student life, with its familiar ingredients of wine, women and tedium. Raffe is a Chianti-swilling poseur, who models himself on celebrated dandies such as Oscar Wilde and James Whistler, and sneers at the banality of everyday reality.

But beneath this surface, there are deeper, more serious forces at work. The chapter titles in this novel refer directly to Joyce’s Ulysses, which in turn is modelled on Homer’s Odyssey. This is High Culture in comic-book form. Raffe intercuts his portrait of student life with imaginary dialogues in which masters such as Bacon, Warhol and Camus act as his sounding board. It is here that the title of the book begins to resonate: Raffe’s dandyism is not a pose at all but an unfiltered attempt to connect to the fullest with the history of art and literature.

The journey continues and we enter yet another layer: that of Raffe’s own psyche. He is a young student who spends his days and nights in bedsit land, drinking, pining for his lost love Penelope and thinking himself into an early grave: ‘In the darkness, I was drowning in conceit.’ What begins as a flirtation with life as a dandy morphs into an intense identity crisis that takes him to the brink of complete madness.

The true brilliance of Unfiltered is the freewheeling, experimental visual style in which Raffe expresses all of these events and layers. When the mood strikes, his drawings spiral out of control, colours flow over lines and frames dissolve in a maelstrom of psychological turmoil. A book to make your head spin. »

For information about the international rights, please contact me or my publisher.