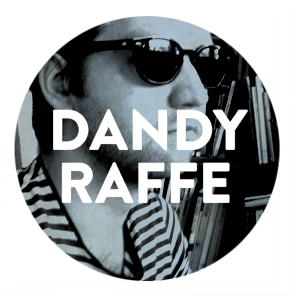 Robert van Raffe studied arts, media & design at the Willem de Kooning Academy in Rotterdam (The Netherlands). He failed a lot of classes during his study at the academy. Supposedly due to his laziness, but in fact he was very busy drawing in his diary. Everytime he had finished another page or 50, Robert published his work in hand-printed books with titles such as Dandy tegen wil & dank en Dandy op herhaling. (In English: A dandy willy-nilly and Dandy repeats himself.) These self-published booklets were very populair, not in the last place because people wanted to see if they were in it. At the academy Robert developed a fascination for dandyism. You could even say he ‘graduated’ on the subject. Dandyism continues to be one of the main themes in his work. After finally graduating in 2005, Robert debuted in the Dutch magazine Zone 5300 with the story A Conversation Piece, a conversation between the two historical dandy’s: Oscar Wilde and James Whistler. Between this debut and the present Robert has published in several other Dutch magazines and newspapers such as: PASSIONATE, De Lijn, NRC Next, Algemeen Dagblad, The Daily Tiger. In the meantime he has also published a few more books (about himself). Het Eiland (The Island) for exampe is the result of the 24 Hour Comic Day of 2007 and tells the story of someone washing ashore on a mysterious Island. Besides drawing comics, Robert is a graphic designer and sort of a Gonzo-comic-journalist. He works as a freelance comic-reporter for NRC Next and Zone 5300. When drawing modern life, he likes to think as himself as a contemporary Constantin Guys.